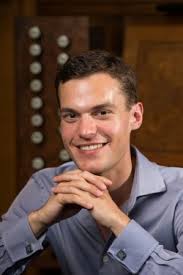 A star among young classical musicians, concert organist Nathan Laube has quickly earned a place among the organ world’s elite performers.  In addition to his busy performing schedule, Mr. Laube serves as Assistant Professor of Organ at The Eastman School of Music in Rochester, New York, where he teaches with distinguished professors David Higgs and Edoardo Bellotti.

Mr. Laube has two new CD recordings available: the Stephen Paulus Grand Concerto on the Naxos label (NAXOS 8.559740) recorded with the Nashville Symphony, Giancarlo Guerrero conducting, and a new solo recital recording on the Ambiente label (AMBIENTE ACD-1062) recorded at the Stadtkirche in Nagold, Germany. In addition, Many of Mr. Laube’s live performances have been featured on American Public Media’s “Pipedreams.”

Mr. Laube holds a Master’s Degree in Organ from the Musikhochschule in Stuttgart, Germany, where he was a student of Ludger Lohmann and recipient of a German DAAD Fellowship Study Scholarship for his studies there.  As a recipient of a William Fulbright Grant, Nathan spent the 2010-2011 academic year studying with Michel Bouvard and Jan Willem Jansen at the Conservatoire à Rayonnement Régional de Toulouse, where he earned Prix de Spécialisé with the mention “Très Bien” and “Féliciations du Jury” in addition to the Prix François Vidal from the city of Toulouse.

Nathan earned his Bachelor of Music Degree at the Curtis Institute of Music in Philadelphia, PA, where he studied organ with Alan Morrison and piano with Susan Starr. Upon graduating, he received the Institute’s two highest awards, the Landis Award for Excellence in Academics and the Aldwell Award for Excellence in Musical Studies. During his time at the Curtis Institute, Nathan also served as an Assistant Organist at the Wannamaker Grand Court Organ at Macy’s Department Store in downtown Philadelphia.

As a church musician, Nathan most recently served from 2011-2013 as Artist-in-Residence at the American Cathedral of the Holy Trinity in Paris, France.  Previously, he served as Organ Scholar at Bryn Mawr Presbyterian Church in Bryn Mawr, PA.

Nathan is frequently asked to teach master classes and workshops in connection with his concerts and often serves on the faculty for Pipe Organ Encounters in the U.S.A. – clinics presented by The American Guild of Organists designed to introduce young keyboardists to the pipe organ and its vast repertoire.  He has also taught at the Oberlin Summer Organ Academy in Ohio and at the Kimmel Center for the Performing Arts Summer Organ Academy in Philadelphia.