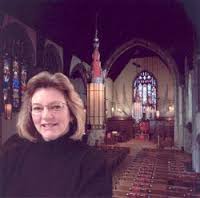 Kathrine Handford joined the faculty of Lawrence University’s Conservatory of Music in 2004. In addition, she was appointed Director of Music and Organist at the historic Central Presbyterian Church in downtown St. Paul, Minnesota in the spring of 2006 after serving the church in an interim capacity for nearly a year.  From 2000-2004 she was Director of Music and Organist at  Hamline United Methodist Church in St. Paul, Minnesota. She holds the Master of Music degree in Organ Performance and Literature and the highly coveted Performer’s Certificate in Organ from the Eastman School of Music in Rochester, New York, where she is currently pursuing a doctorate in organ. Her principal teachers include the late Russell Saunders, David Craighead, David Higgs, Jerry Evenrud, Paul Manz and Grethe Krogh in Copenhagen, Denmark.

A musician of wide ranging interests and accomplishments, Ms. Handford has appeared in recitals in the United States, Canada, England and Scandinavia. She has been a featured artist at the Bergen International Festival in Norway, the St. Olaf Festival in Trondheim, Norway, the Lahti International Music Festival in Finland, and at the International Organ Festival in Arona, Italy. Ms. Handford was the winner of the 35th International J.S. Bach Competition held at the Kennedy Center in Washington D.C. in 1993. In the same year, she received first prize in the John R. Rodland Scholarship Competition, sponsored by the New Jersey Chapter of the American Guild of Organists. She has been the recipient of many other grants and awards, including the National Endowment for the Arts. She has appeared as soloist with the Minnesota Orchestra in Saint-Saëns Symphony No. 3 in C Minor and with the Kansas City Chamber Orchestra performing Poulenc’s Concerto in g minor at the Association of Lutheran Church Musicians National Convention held at The Temple of The Community of Christ in Independence, Missouri. She has performed numerous recitals with the Swedish natural trumpet virtuoso Niklas Eklund. Her interest in new music has led to premieres of several new works for organ, including Stephen Paulus’s Toccata for Organ, Ketil Hvoslef’s Toccata for Organ, Robert Starer’s Angel Voices, and David Liptak’s Sonata for Violin and Organ which was commissioned by Benedictinus 2000 and premiered in Rome during the Jubilee. In the Twin Cities, Ms. Handford is active as a free-lance musician. She has been a Visiting Assistant Professor at St. John’s University in Collegeville, Minnesota, and has led numerous sessions during the summer Liturgical Music Workshops which draws individuals from throughout the United States and Canada.